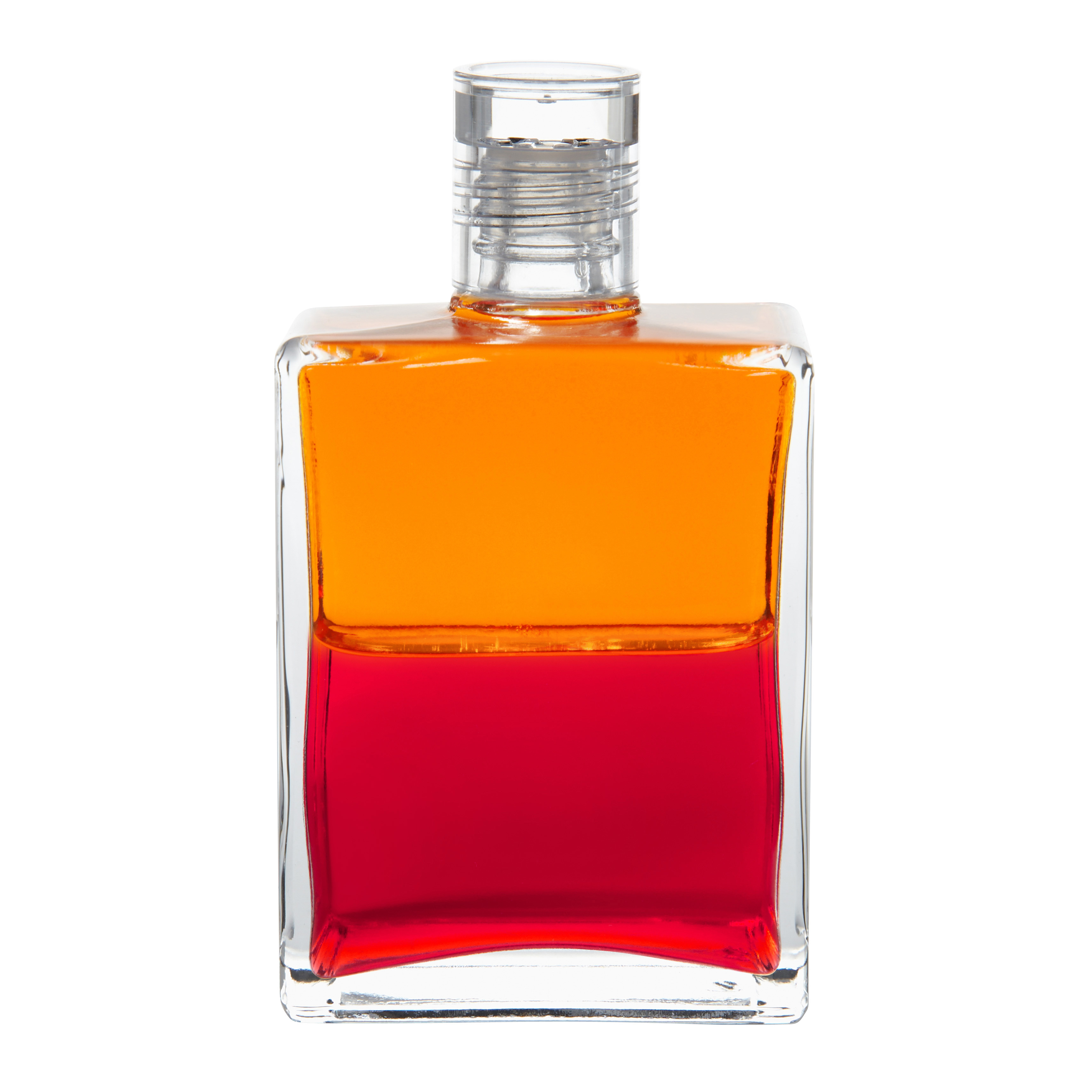 "Archangel Khemiel is to be thought of as having an elevated status in relation to the order of all angels. With Khemiel there is a possibility getting a glimpse of something of the source, to gain insight in to the essence of all that is. Chamael and Khemiel may be considered as different aspects of the same being.

In this bottle there is a combination of the energies of both Khemiel and Ariel. Khemiel is the female aspect and Ariel the male aspect, consorts or twin flames of the same essence. When we look in to the Orange and the Red we explore our insights and have the energy to be able to express them. As we release the awakening energy of the Orange we come to the awakening of that deeper energy of the Red, the Christ energy. Through the Orange we might feel empowered to face our challenges with the energy of the Red. We might think of this Archangel in the water world, a sense of the emotional aspect of our feeling being of ourselves being resolved with the Orange and the Red.

Looking at the Orange and the Red we can see how it relates to the Coral, the energy of which is intensified in the latest Pomander, the Pale Coral, this gives us a sense of what it is that comes in to being through this bottle. A sense of deep insight and the empowerment of the individual through trust and faith in the centre are aspects that are of the utmost relevance at this point in the system of Aura-Soma. In relation to the interface between what’s conscious and unconscious, there’s a real balance within ourselves between the Orange and the Red, a primary or essential aspect within our being. If we trust ourselves within the depths of ourselves then many things become possible in terms of what we meet in the context of life.

Sometimes Khemiel being thought of in terms of conflict and Ariel, in terms of generosity as well as being the development of the same energy as we have in B23. Ariel is recognised as the Lion of God, and having the courage and strength that is associated with that description. The energy of the lion is important within this bottle, it’s kind of the 11, 23 and what it is that was faced in the Garden of Gethsemane. The 115/7 story which gives us the opportunity to face our greatest tests with courage and strength, to be able to integrate what it is that our obstacles are in relation to seeing the gift in those obstacles. Normally we would go in to resistance or an inappropriate response which is our conditioned behaviour, Khemiel & Ariel support us to be less reactionary.

Think of this bottle as something that could assist us with summoning remembrance with ourselves at multiple levels. Imagine the possibility of the different aspects within oneself being called together - when we’re wrestling with divisions within ourselves Khemiel and Ariel can provide support. In the system of Aura-Soma we think of a 7 as a challenge or a test, the 7 bottle is called The Garden of Gethsemane, which implies a deep level of understanding through the testing of self. 115, the two 1s and the 5 come together echoing that 7 energy and this idea of wrestling with the parts of the self to come to more unification. The Essene bottle B11 and Vickys bottle B5 coming together. The myriad of different parts within our being, being called together shows how these two Archangels combine to create a sense of deep unification within the self.

We are approaching a Super Moon on December 3rd and this is of significance because this moon is signalling a time of harmonisation and unity in all our relationships. This supermoon itself priming us for the galactic alignment that takes place 18-22 December. The galactic alignment at this time inspires us to embrace our place in a greater evolutionary purpose.

These two Archangels support universality, the Red and the Orange coming together in the Coral energy which is the sense of unification rather than diversity. In each of us we have a longing for a sense of an agreed point of view rather than resistance or opposition. We need to stand firm in our own faith and trust, our own truth, to be able to come to a real sense of unification. Khemiel and Ariel help us to sense the interconnectedness with nature, with all the forces and energies of Gaia and all the beings of both this world and of other worlds. To go beyond a sense of separation and to be able to cherish the universality that is implied by our interdependence. A sense of deep love and honouring of compassion towards the different aspects of our being, being called together at this moment in time through Khemiel and Ariel."

"Just another thought after yesterday's full moon which seemed to me very strong.

The truth as the consciousness of bliss was mentioned in Salzburg (Aura-Soma meeting in November 2017), at the time I had no idea that I was speaking about the new bottle. Orange is always about the potential for that bliss to come into being. If we face the truth of consciousness then bliss naturally arises.

All phenomenon occur in consciousness itself form or no form.

Vicky whispered about a strong connection as her bottle #B5 is so much contained within 115. Water is truth, truth is consciousness is bliss.

Chamael B104 is also echoed for us in this new combination of Orange over Red. Chamael always deeply and profoundly connected with love, kindness and compassion.

Ariel in Aura-Soma is also connected to the B5 of Vicky’s bottle especially through the B23.

Sometimes the synchronicities are so profound. In the new beginning for Aura-Soma in the world it is so beautiful to feel the continuity of the birthing through Vicky Wall continuing.

The birth of the ‘New’ in the system is not without its challenges and I know through many friends and colleagues throughout the world this to be the case.

That sense of being tested is what spurs us on to great inspiration and more responsible creativity.

For surely and for certain each of us are responsible for what we create in our lives. Do we ever really wish to create what it is that we don’t want rather than what we do.

I AM is also in our new combination and in the inner hierarchy that energy of B40 the I AM bottle, and also B56 show us different aspects of the “I am”. I remember Vicky commenting on a lady attending a seminar at Gold Hill House after B40 was born oh you wish to the “I am”. The lady was wearing all black top to toe.

Often reflecting on some of the events over the last 34 years I think how incredible this journey has been. Never and at no time before do I feel how strong the potential for change is with us in the world. The spirit is as present amplified and intensified as the system expands.

One of the themes also in Salzburg which is also in this bottle is the theme of forgiveness how important it is at this point in time. To forgive ourselves and also to be able to forgive others.

I am so grateful that this bottle has come to be and how much I feel it can support us in our journey at this point in time.