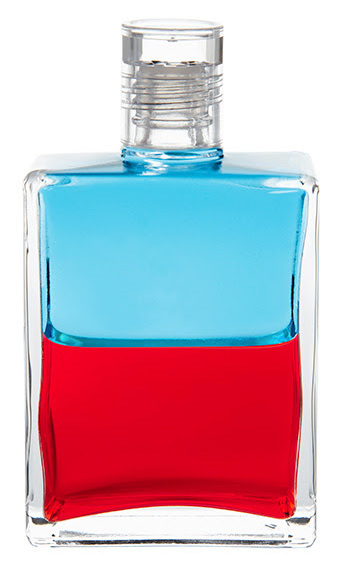 I'm excited for the birth of our new bottle and it feels like another really important step in the evolution of the system. Turquoise/Red and called Pan, almost the expression of the consort to Queen Mab, a wonderful moment in time (11/11), there's so many openings for us, doorways to levels of being as the 11 is always a doorway.

When this bottle comes to be it comes through an open door predicting and inspiring us towards that which is to come.

The spirit in nature revealed in a dynamic form, the spirit of nature that is contained in all trees, plants, crystals, gems, and within ourselves; in fact the spirit of nature wherever it may exist. The Turquoise is always the creative force as its principal aspect as well as an expression of the journey; it seems to me when it is linked with the Red that that creative force really comes to Earth. That we may manifest a creativity, that we may come to understand our thoughts and feelings, our Being and how they shape our own reality. In a way it's a bottle that I feel is going to help each of us in taking responsibility for our inner journey, in a way that goes beyond projections or transference. The Turquoise we also think strongly of in relation to the journey of individuation and as more consciousness waves become available to us in the light grid upon the earth, it's as though we can become grounded and can do so in a way that has been previously less available. Activation by the elders that's necessary for the being of the Earth to support us individually and collectively in the journey towards ourselves.

Because of the obvious and profound connection with Queen Mab I wanted to quote the 'Hymn of Pan' by Percy Byshe Shelley:

From the forests and highlands

We come, we come;

Where loud waves are dumb

Listening to my sweet pipings.

The wind in the reeds and the rushes,

The bees on the bells of thyme,

The birds on the myrtle bushes,

The cicale above in the lime,

And the lizards below in the grass,

Were as silent as ever old Tmolus was,

Listening to my sweet pipings.

And all dark Tempe lay

The light of the dying day,

Speeded by my sweet pipings.

The Sileni, and Sylvans, and Fauns,

And the Nymphs of the woods and the waves,

To the edge of the moist river-lawns,

And the brink of the dewy caves,

Were silent with love, as you now, Apollo,

With envy of my sweet pipings.

I sang of the dancing stars,

I sang of the daedal Earth,

And of Heaven, and the giant wars,

And Love, and Death, and Birth-

And then I chang'd my pipings,

Singing how down the vale of Maenalus

Gods and men, we are all deluded thus!

It breaks in our bosom and then we bleed.

All wept, as I think both ye now would,

If envy or age had not frozen your blood,

At the sorrow of my sweet pipings.

In his poem Shelley writes of a musical contest between Pan and Apollo. In the Greek Mythology, where Apollo is the god of music, Pan was attributed as the god of rustic music, of nature, of the wild, of shepherds and of mountains - his creativity comes from his senses. This expression of the beauty in nature and using the senses to feel rather than relying on the intellect is further expressed within Pan's pipes. In the tale from Ovid's 'Metamorphoses' the pipes are created when Pan attempts to hold the nymph Syrinx only to discover that he is clasping reeds. Syrinx's beauty has continued from herself as a nymph to her reed-form, it is this existential inner beauty Pan finds irresistible - she is no longer thinking or feeling - with Pan she has truly become.

Half man, half goat Pan is also very often associated with sex, often seen with a phallus. As we look at the red in the base fraction this sexual energy or kundalini energy cannot be denied.

Red energy is often associated with rage and it's interesting that the word Panic comes from Pans rage when he was woken from his afternoon sleep. This awakening from slumber, the awakening from the dream, the awakening from another state of being can often be accompanied by a sense of rage, a sense of anger, a sense of being not oneself, for truly if it is that we begin to awaken then we face the unfamiliar, the void or emptiness. This combination really brings us to a different sort of awareness, the awareness that really has the potential of awakening.

Baruch Spinoza, a 17th Century philosopher published many works theorising on the divine in all nature, many would call him the father of pantheism. This spirit in nature is also something to be revered, something to be acknowledged and in our time the necessity for it to be resurrected. Queen Mab and Pan really call upon us in this re-evaluation.

Today, Mercury will pass directly in front of the sun, it will take five and a half hours to cross the face of the sun, Mercury is 1/194th the diameter of the sun so a telescope with a solar filter will be required to see it, weather permitting. The last time Mercury crossed the sun was May, 2016 and before that in 2006. Mercury transits happen 13 times per century on average.

Mercury is the key signifier for our communication, similarly reflective in the Turquoise, upper fraction of Pan, along with analytical abilities and intellect and the energy to express it coming from the Red. This is the bottle that might help us to express the deeper levels of our feelings from the depth of ourselves.

We come to a time when in Aura-Soma we are really putting an emphasis in relation to social and media communications, the energy that is necessary for Aura-Soma to be more visible and less niche in the world. The way this translates itself in this bottle is only too apparent. It's a wonderful opportunity for the community of Aura-Soma to have an understanding of the system and its unfoldment to really come together to utilise the opportunity that the company has invested in, in relation to the portal, the website, the opportunity to bring our energies together to help to fulfil the vision and the support of humanity in the awakening journey at this point in time. In a way it's a precursor for events, beginning in 2020 so one of the doorways is also for the next few months, reflection, growth, inspiration, creativity being grounded in daily life. The test of that doorway 11/7 shows us every time a door opens we might have to face something unexpected, something unfamiliar and the uncomfortable nature where our faith is tested. There is an Essene connection of the 11, the chain of flowers being tested as to what's true and what needs re-evaluation. As it comes together as a 9 via the 18 then also it reminds us of the potential of awakening that began in the hybridisation that began in ancient Egypt and gave us the opportunity to awaken the snake within ourselves as part of the heart within the heart of the 9, this creative force ever present through world culture from the earliest beginnings from the earliest times up to the present day. To follow the light within. Something that I also wish to share is that this bottle might also help to protect us from frequencies of manipulation if we really work with it with our appropriate intentions.

With Love and Light 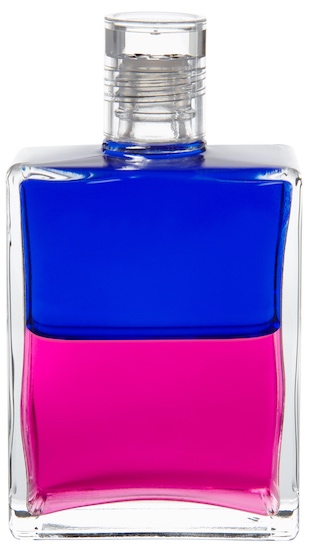 Born 14th January, 2019 at 14:00pm GMT Royal Blue invites us to see ourselves more clearly, and rather than focusing on the external projections of ourselves, it supports us to look within. As the Royal Blue is now linked in this bottle with the Magenta in its bright form, not Deep Magenta as in B0, it [...]

As with the release of the Coral Pomander, the Pale Coral Pomander has come in to being in the wake of an eclipse. Eclipses have long been known to change the political order; in Babylon a commoner was appointed King prior to an eclipse. The August 21, 2017 eclipse is associated with a particular family of eclipses identified by astrologers [...]

Born - 15:45 GMT Friday 1st December 2017 Mike’s first thoughts on the new bottle. "Archangel Khemiel is to be thought of as having an elevated status in relation to the order of all angels. With Khemiel there is a possibility getting a glimpse of something of the source, to gain insight in to the essence of all that is. [...]

Delightfully red and tasty too, this syrup is a great alternative to anything bought – you can control the amount of sugar when you dilute the syrup in still or sparking water. Ingredients 4 cups – more or less, chopped Rhubarb – red or green stalks, remove leaves. 1 cup water 1 cup sugar – if Rhubarb is tender and young you can [...]

Born 14th December 2013 2.02pm BSTColour: Mid-Tone Royal Blue/Mid-Tone OliveKeynotes: To restore balance between inner and outer relationships.Where to apply: In a band encircling the body around the chest/heart/throat areas. Main Points concerning this bottle:This bottle may bring clarity into situations regarding the way in which we relate; this may enable us to discover hidden manipulations. Enables clarity of speech and [...]

Why We Love Colour

Why we love colour…Colour plays a very important part in our lives these articles are to give you insight into how important colour is and how you can add more colour in your day for a fun, healthy life. Understanding colour more in our day to day life also helps us to understand how the colours of Aura-Soma help [...]

As we enter 2015 we are also entering into the energies of the Starchild Blue/Pink (Bottle 20) and Service in the New Aeon Clear/Violet (Bottle 15). It is interesting to look at these bottles in that context - the Starchild in Service to humanity supported by the influence of the energies of Bottle 112 Turquoise/Mid Tone Royal Blue Archangel Israfel, born [...]

Show Me The Colour Of Your Money

We use so many colour terms in our day-to-day speech … in English at least.He was Yellow Bellied – an old sailor term for – he was fearfulHe is Red with rage – he is so angry his face has turned red.In the Pink – happy as.She has the Blues – she is sad.Green with envy/ green eyed [...]