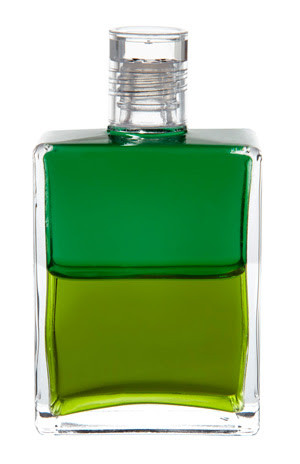 B113 Archangel Cassiel is associated with Saturn. Cassiel rules the Sabbath or the day of rest, the pause in our week for reflection. The combination of Emerald Green/Mid Tone Olive brings together the journey from the solar plexus towards the heart. It gives us the opportunity to make that transition to a new level of hope as we let go of the disappointments of the past. The resentments and bitterness transformed, not to wishful thinking but to a new sense of hope.

Cassiel is often seen as the Watcher, the one that we may think of from an Aura-Soma perspective as the same energy as we perceive in the Coral or the Pale Coral. In a sense Cassiel watches rather than being active or interfering in the circumstance of human existence, unless he is called. It is particularly stated in Kabbalistic texts that Cassiel is not allowed to interfere in our human domain.

What is really important from an Aura-Soma perspective is that we need support, especially at this time, that the truth that lies in our hearts can connect with the watching, the ‘not knowing’. This may seem quite a complicated statement but in actual fact it is really simple. To know that ‘we don’t know’ is fundamental. It is something that opens the door through gratitude, through a sense of emptiness to a deep sense of something that is beyond the beloved, the source of love in existence. At this point in time Cassiel represents something of this energy, how we might interact with this energy for ourselves through a re-evaluation of the ‘I AM’.

A new perspective of spiritual self confidence is born.

Cassiel is also an Archangel that relates to deep levels of cellular memory, particularly the cellular memory around the matrix or the constructs that are the patterns of tension that have produced the modification of the heart. If we can imagine Cassiel as a love that is ‘beyond all understanding’, a love that is absolutely without limits (boundless) then Cassiel could help us to release our heartache, our sense of betrayal or disappointment. Archangel Cassiel has been very much worked with and invoked in the Kabbalistic, Judaic-Christian tradition. He/she is an Archangel without attribution in the way in which it is expressed in all the texts. It is said that Cassiel is a solitary Archangel not normally in association with other Archangels. Alone and melancholy Cassiel sheds tears of release and through the deep sadness brings a new sense of space and place. The dove of peace carries away that which troubles us on or in the arena of life. As the direction becomes clearer, our difficulties are transformed through the depth of love.

Part of Cassiel’s functionality as we come closer to the truth of the heart is a sense of deep loneliness and aloneness which, from an English perspective, is similar to ‘all-one-ness.’ This is part of the energy of this combination. The unification, the new spiritual keynote, a feeling of unity beyond tradition or form.

We can also view Cassiel as an Archangel of Fire, a fire of purification, a fire like original creation. Here I want to mention that there is a sense of a new beginning in Aura-Soma, the same impulse that was there at the beginning. A re-sounding of the DOH of the octave through which Aura-Soma began, to re-establish the new beginnings in the system of Aura-Soma. There are numerous synchronicities with this, too many to go into here but suffice to say that this Archangel is there to support us in re-establishing with the original impulse that brought Aura-Soma into being; what was given to Vicky Wall, what was inspired through her in that first sounding of the DOH more than thirty years ago. It sounds again at another level with the inspiration that Cassiel brings.

It is also important to mention that Cassiel can be a balancer in relation to the male/female aspects within ourselves, the light and the dark. The wisdom and bliss that lies at the deeper levels of our being.

Cassiel can also be seen in many images as a King riding a dragon and also as a figure similar to that depicted in the Hermit tarot card so it is an interesting fact that this Archangel is born in Virgo. He is related to the Archangel Sandalphon. As with Sandalphon, who, in the process of the children coming and going in this world is often seen as an angel of tears, this is also true of Cassiel.

His day of the week is Saturday and in the same way as we think of Anubis as the guardian between this world and the next world, we can also think of Cassiel sharing this role. An interesting reference that also comes to mind is that he is the ruler of the Seventh Heaven, the Holiest of the Heavens that houses the Throne of Glory which is attended by the other seven planetary Archangels. The age of Saturn, of ancient and profound wisdom until it was that Saturn got too close to the sun. The rings that formed in the rapid gaseous evaporation that occurred as the ice caps thawed at an accelerated rate.

Cassiel’s work is to do with karma to help us to get through the condensation of the karmic lessons taking place, and also to do with farming to help us unfold what the new farming methods need to have implicitly within their attitude towards the being of the earth.

His work also relates to meditation as well as helping us to understand the relationship between time and death.

There is a certain amount of keynote to do with Cassiel which is spiritual self confidence, a sense of confidence that comes through an understanding of the true nature of self worth. It almost seems contrary or paradoxical to talk about spiritual self confidence when in the beginnings of this piece I was mentioning about the sense of ‘I don’t know’ rather than I do. Maybe somewhere to know that ‘we don’t know’ is a sense of trusting our star, trusting the essence of ourselves and how that relates to the opening through the olive towards the heart. This in fact becomes part of the understanding that Cassiel brings to us at this point in time.

In the Aura-Soma system we think of the 10 bottle, Green over Green, as karma: as you sow so shall you reap. We can think of this as what we experience now as a consequence of our actions of the past, what we do now will create the consequences for who we are yet to be. It is also important that we think of truth as being something that brings joy and celebration. Part of Cassiel as a watcher is not to have an opinion in any way to do with judgement, but more to delight in that which is seeing whatever it is that is being watched. The scenarios that appear in the mind are given space to reveal the blue sky hidden within.

The animal associated with Cassiel is the crow or the raven which, within the Druidic tradition, is very much associated with the Christ energy besides many other influences.

Cassiel also rules the elderly, to do with wills and with death. The flower that is most associated with Cassiel is the white lily and also Vicky’s favourite flower, the violet.

I think that it will be quite unusual energetically because of the particular combination of stones that have been called forth in the spagyric tinctures. Surprising that turquoise and obsidian are together, a very interesting combination, as well as diamond and onyx. Another stone which is really important in relation to Cassiel is Sapphire, especially the pale blue or mid blue sapphire. It is an energy which links the Archangel with other qualities that are otherwise hidden. It is a stone which can really help to bring a sense of abundance, letting go of our sense of lack or what is holding the patterns in place that deny ourselves the possibility of an abundant life.

Cassiel also brings the possibility for us to go deeper in meditation towards clearing the karmic patterns, towards the more enlightened view to help to bring about our real spiritual depth.

Cassiel can help to bring about clairvoyance. When we think of the colours of Emerald and Olive we would not immediately associate them with the quality of clear seeing, but think in terms of our understanding of panoramic awareness, being able to see things that are beyond the limitations of our own position. The clairvoyance and awareness of being able to put oneself in the position of another is the clarity that Cassiel brings about, to help somebody to really get in touch with their deeper sense of intuition.

We can think of this Archangel not only in terms of Temperance (113 = 14) but also particularly in relation to how Cassiel can support us in expressing our truth, both on an individual basis and also in the public context, through the expression of the wisdom that lies within that brings the quality of the analytical mind into balance with the higher intuition. The support to express oneself quietly with integrity, to calmly express what lies at the deeper level of the wisdom that lies within.

We would not particularly think of the effectiveness of emerald and mid tone olive in relation to the throat chakra but this particular combination is going to be very helpful in clearing the blockages and obstacles in relation to our ability to speak clearly and to express the truth within ourselves.

Cassiel encourages us to seek solitude that we might get in touch with the deepest level of meditative experience. To find silence in the solitude of spirit is how we may let go of the karmic patterns.

Cassiel is a health bringing Archangel who helps us to get in touch with a beauty that is coming from the inner essence, the deeper core within ourselves. When we think of how beauty is an expression of intention and attitude that lies within, then Cassiel can also help us to get in touch with this. Our patterns of the past in relation to our attitudes to do with lack, that prevent the beauty of the soul being realised or coming into being, may be put behind us. Cassiel brings us into a new sense of truth and wonder in the abundance that life has to offer.

In a previous paragraph there is reference to Cassiel as The Hermit in the tarot, associated astrologically with Virgo. The card Temperance in many tarot images, more closely relates to another aspect of Cassiel, who is also known as the Angel of Temperance. In the image very often the Angel of Temperance stands with one foot in the water and one foot on the land symbolising the conscious and unconscious aspects that are part of the understanding of Cassiel. That gives an idea about the alchemical process, the pouring of the golden fluids from one cup to another.

Cassiel is also known as the Angel of Serenity.

One of the attributes of Cassiel is also that he/she enables us to become more independent in relation to how we identify with the forces of the waxing and waning of the moon rather than being subject to them.

Cassiel also has a reputation of being helpful for those with ‘a fear of water’, who find that they do not like water. Cassiel is helpful in relation to boats and sea travel. It is strange how some of these attributions work, especially when we consider the fact that we are seven tenths water and what is it that we are afraid of that stops us realising the truth of ourselves?